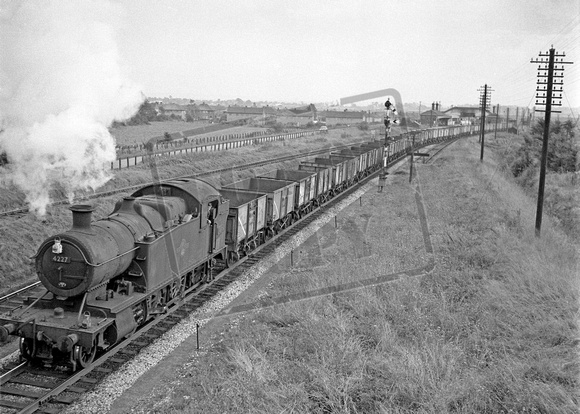 Down empties destined for South Wales

Peter Kerslake says "4227 was shown as being allocated to 86A , which was Ebbw Junction, at this time, and is in charge of a formidable rake of empty coal wagons shown here dropping down to the Severn Tunnel at Patchway.
Developing South Wales coal and mineral freight traffic in the early 1900's had shown the need for 2-8-0 tank versions of the "2800" class of tender locomotives, and so the first such locomotive in the shape of 4201 emerged from Swindon in 1910, with later versions in the production series constructed from 1912 having enlarged coal bunkers holding three and a half tons of coal, half a ton more than 4201.
In later years, however, and following the end of the First War, the decline in mineral traffic resulted in a number of the class being rebuilt with extended frames and recofigured into a 2-8-2T design capable of holding five and a half tons of coal in an enlarged bunker and so permitting them to work longer distance freight rosters".
© Rail-Online
Powered by ZENFOLIO User Agreement
Cancel
Continue