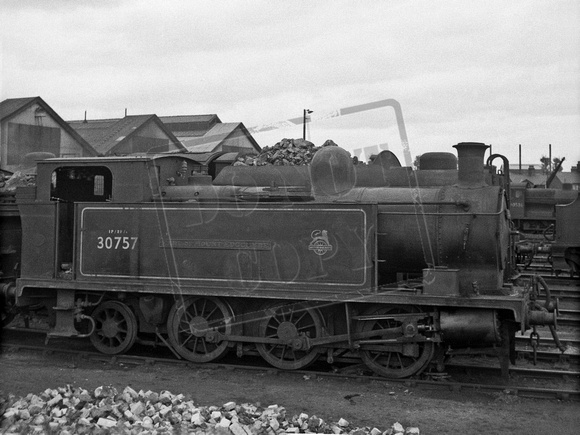 The former PD&SWJR 0-6-2T 30757 Earl of Mount Edgcumbe was an Eastleigh works shunter at this date. It was built by Hawthorn Leslie in 1907 for the PD&SWJR. After about 45 years working in the south west mainly on the Callington branch 30757 and 30758 Lord St Leven were replaced by Ivatt 2-6-2Ts in 1952. They remained for another four years in the Plymouth area until transferred to Eastleigh during 1956.

Peter Kerslake says "The locomotive was named after the Earl of Mount Edgcumbe whose estate still runs down from his house to the banks of the River Tamar at Cremyll, for many years past a favourite spot for the people of Plymouth."
Powered by ZENFOLIO User Agreement
Cancel
Continue