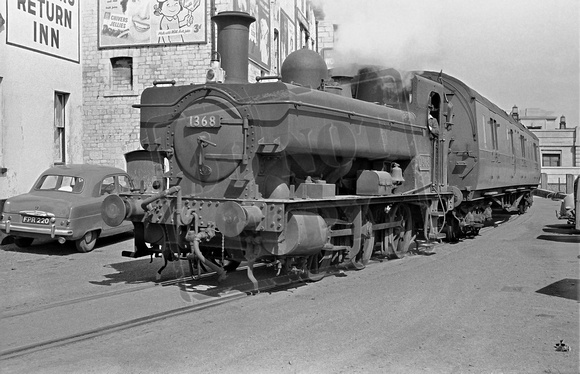 Ex-Great Western Railway Collett '1366' class 0-6-0 Pannier Tank No. 1368. Built at Swindon in February 1934 and withdrawn in October 1964. Street running in Britain was not quite the rarity that at first might appear likely. Preceded by the proverbial "man waving a red flag", it was a relatively safe and smoothly executed operation, even when the train consisted of view-obscuring carriages rather than goods wagons. The usual hindrances were not people but inconsiderately parked road vehicles. So what else is new! This is July 1956 at Weymouth Quay in Dorset with 1368 manoeuvring boat train stock, FPR 220 is sensibly keeping well out of the way!

Peter Kerslake adds "Retained when built at Swindon as a Works shunter until February 1947 when it moved to Weymouth for use between the docks and station. The bell was operated by the fireman whilst on the move through Weymouth's narrow and congested streets with a railwayman walking ahead -his shunter's pole is visible resting against the cabside."