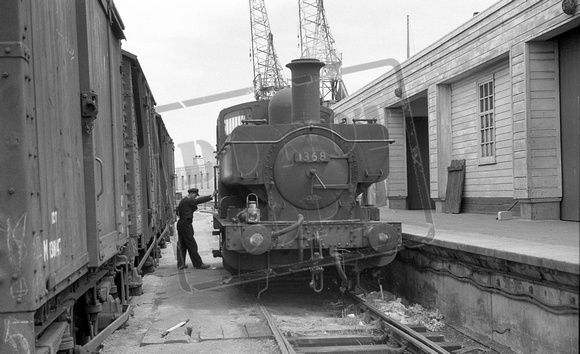 The third member of its class of six , 1368 was an early transfer from its long standing former home at Swindon down to Weymouth in the mid 'fifties in company with her sister engines 1367 and 1370 , later being joined by 1369 in April of 1960 .
The narrow and congested streets of Weymouth required a small engine to haul the often heavily loaded passenger and freight workings from here at the quay to and from the town's principal main line station , Weymouth being the port of arrival and departure for frequent Channel Islands sailings going back to the days of the Great Western Railway.
In 1962 , three of the class , 1367 , this one and 1369 all were reallocated from Weymouth to Wadebridge to replace the elderly Beattie Well Tank engines on china clay workings in and around the Bodmin area , although 1368 was not considered the best of the three and consequently spent much of her time in Cornwall on station pilot duties at Wadebridge , with a poorly regarded 1367 being a " stand by " and 1369 doing most of the work !
That was undoubtably due to the fact that 1369 was the sole member of the class to have a replacement boiler , earlier having acquired the boiler from 1370 upon its withdrawal in early 1960
© Rail-Online
Powered by ZENFOLIO User Agreement
Cancel
Continue