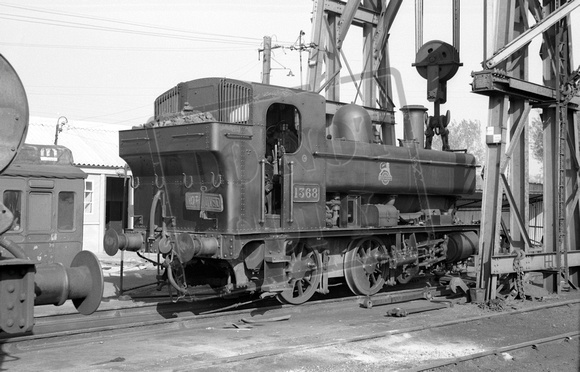 A pleasing close up view of Weymouth's 1368 , showing to advantage detail of the engine , built in 1934 and a design originating back some sixty years to a class of former Cornwall Mineral Railway locomotives taken into stock by the G.W.R. in 1877 , and used as the basis for Churchward's " 1361 " class of 1910 which were later followed by the six " 1366 " class of which this one was the third to be constructed , incorporating the distinctive outside sloping cylinders and valve motion of their predecessors .
Following some twenty six years allocated to Swindon shed , 1368 , in company with her two sister engines 1367 and 1370 was at Weymouth by early 1956 , remaining there until 1962 when she was transferred to Wadebridge in North Cornwall together with 1369 and 1367 to replace the aged Beattie Well Tanks there on the china clay workings in and around Bodmin .
1369 , considered at that time to be the best of those three at Wadebridge , doubtless due to the replacement boiler it had received from 1370 in 1960 , still survives today on the South Devon Railway
Powered by ZENFOLIO User Agreement
Cancel
Continue