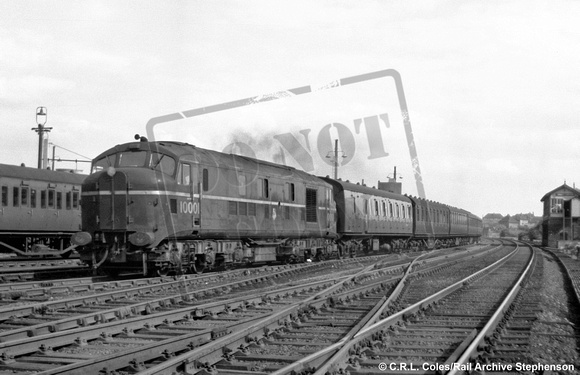 LMS 10001 approaches Wembley Central with a Euston to Bletchley train on 7th May 1955.

Peter Kerslake says "My records show that the Midland Region's twin express passenger Diesels 10000 and 10001 were used on crew training duties at about the time of this photograph in May of 1955, working from Camden Depot and running between Euston and Bletchley before they returned to more demanding roles on the West Coast Main Line Top Link rosters throughout 1956 and 1957.
Both Diesels had spent the previous two years on the Southern Region, allocated to Nine Elms M.P.D. respectively from March and April of 1953, but their time on the Southern was marred by numerous failures.
Following their return to the Midland Region in the mid 'fifties both units were later moved from Camden to Willesden Depot in November of 1959 from where they were withdrawn with 10000 ending her days in service in early February of 1963 whilst 10001 remained until March of 1966."