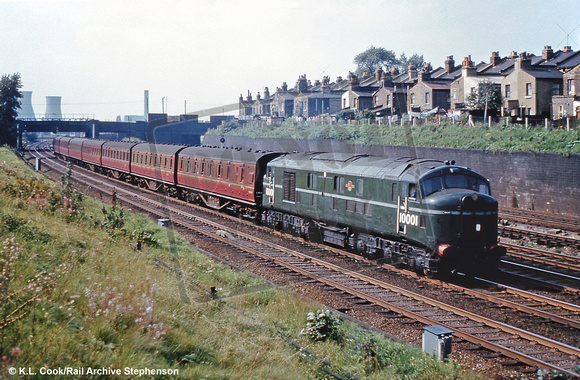 The second LMS prototype diesel-electric No.10001 approaches Kensal Green Tunnel with the 12.41pm Bletchley to Euston train on 10th September 1960.

Peter kerslake adds "A fine colour image of the Midland's 10001 running through Kensal Green taken late in the locomotie's life as sadly she was withdrawn in March of 1966, outlasting her sister 10000 by three years.
Both Diesels had been allocated to Willesden Motive Power Depot from November of 1959 this second locomotive having been built in July of 1948 and running her first paired run with 10000 on the 5th October 1948 from Euston to Carlisle and back"