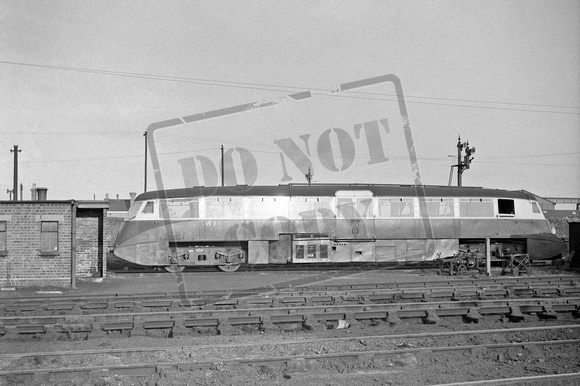 Squeezed in between the shed clutter.

A rare image indeed of the very first of the Great Western's Diesel Railcars, looking rather more basic in design than her later sisters and displaying her centrally fitted double doors and, as was the custom with all later units, her side panels covering the bogies having been long since removed in order to facilitate maintenance of her running gear.
Entering service following trials in December of 1933 it seems as though this first Railcar worked between Cardiff and Bristol in her early years, possibly based at Cardiff's Canton Depot , but it is certainly a fact that in the following year three more units numbered 1, 2 and 3 were put into traffic, running between Cardiff and Birmingham and equipped with a mini buffet, to be followed by numbers 5, 6 and 7 with bodywork by the Gloucester Carriage and Wagon Company built at their Gloucester Bristol Road works and then followed by a further ten from the same Company.
This pioneer railcar appears to have ended her days at Oxford Depot in or about 1957.
Powered by ZENFOLIO User Agreement
Cancel
Continue