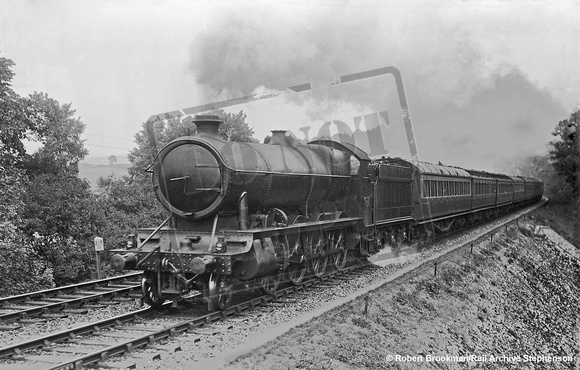 Peter Kerslake adds "Introducedi n 1919 primarily for use on heavy fitted fast freight workings and often on overnight rosters Churchward's "4700" class were well abe to handle heavy passenger duties as well, as this fine photograph shows.
4701 appears to have a substantial load behind her tender but is tackling Dainton, with its one in thirty six grade, without the assistance of a pilot engine from Newton Abbot so she will take this train down to Plymouth on her own.
Later years took 4701 to Southall M.P.D. and then to Old Oak Common from where she was withdrawn in September of 1963.
In July of 1964, following withdrawal, she was purchased by Coopers Metals for disposal at their Severnside yards at Sharpness, but although being taken there was shortly sold on to Cashmores at Newport and was cut up there."
Photo: Robert Brookman/Rail Archive Stephenson
Robert Brookman/Rail Archive Stephenson
Powered by ZENFOLIO User Agreement
Cancel
Continue