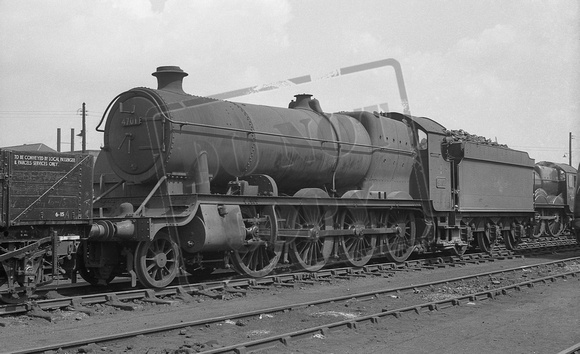 Showing the snifting valve on the outside of the steam chest and protruding through the cylinder cover. A feature of various engines at different times.

Peter Kerslake says "The second of her class, 4701 displays here the impressive bulk of Churchward's heavy freight and mixed traffic "4700" design, virtually a "stretched" vesion of the "4300" class of 2-6-0 's.
Introduced in 1919 the class were coupled to larger 4000 gallon tenders from 1932, but the Great Western declined to honour them with names on the basis that the class were not passenger locomotives, although in their later years their lined green livery greatly enhanced the appearance of what were known as the "Night Owls", and they did in later years work Summer Westcountry Top Link passenger duties, especially the "Royal Duchy", mainly on Summer Saturdays.
4701 was allocated to Old oak Common in early 1948, later moving to Southall in 1962 before returning to Old Oak again after just one month.

The second member of her class, 4701 looks rather more work stained than does the gleaming "Castle" just visible, but she still displays her impressive bulk so characteristic of the class.
Following withdrawal from Old Oak Common in September of 1963 this engine was sold to Coopers Metals, a Swindon based Company owning scrap metal yards at Sharpness on the Goucestershire bank of the River Severn, and she was towed there for disposal in July of 1964.
Coopers' facility at Sharpness was heavily overloaded with condemned locomotives at that time, with a limited workforce, and so 4701 was sold on to Cashmores for disposal at their Newport yards.
© Rail-Online
Powered by ZENFOLIO User Agreement
Cancel
Continue