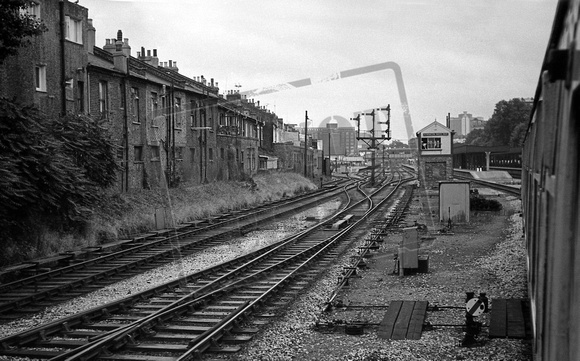 David J Hayes adds the details "An interesting viewpoint, which might well appeal to railway modellers, especially with the buildings backing onto the line (see below). The train is most likely performing a shunt to attach loaded Motorail cartics/flats or has performed the said shunt (cartics/flats out of sight) and is now on it way northwards towards Willesden.

With regards to the buildings on the left, one of these, possibly the one partially obscured by trees/bushes or maybe positioned just out of shot further to the left, was featured on the TV programme "Grand Designs". On the subject of buildings, the Empress State Building, situated near Earls Court, can be seen in the distance (to the right of the signal box)".
© Rail-Online
Powered by ZENFOLIO User Agreement
Cancel
Continue