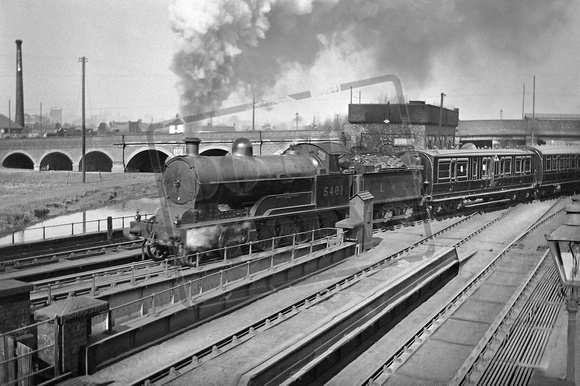 Ex-London & North Western Railway Whale 'Experiment' class 4-6-0 No. 5461 'City of London'. Built at Crewe in February 1906 as L&NWR No. 978 and withdrawn in May 1934. The south end of Northampton Castle Station was a location visited by Les Hanson on many occasions. Hardly surprising with scenes like this to witness, taken in March 1933. This Whale 'Experiment' has only just over a year to go before withdrawal. The leading coach is ex LNWR 50' composite centre brake to D216 although now downgraded to all third. The arc roof corridor stock were constructed between 1893 and 1902. These coaches must have looked magnificent in their fully lined LMS crimson livery as seen here.