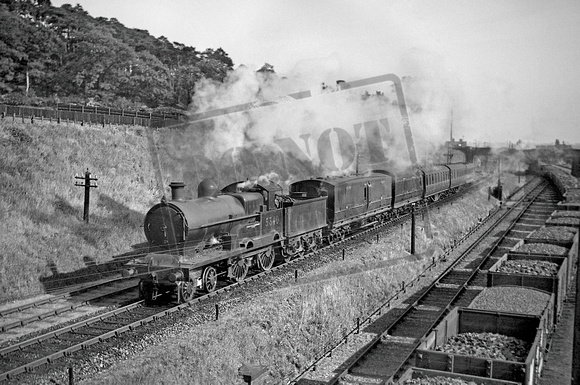 Ex-London & North Western Railway Bowen Cooke 'George V' class 4-4-0 No. 5340 'Bulldog'. Built at Crewe in April 1911 as L&NWR No. 956 and withdrawn in November 1935. It had been named 'Daschund' until WW1, but for obvious reasons, a much more appropriate and patriotic name was chosen. The former L&NWR cross-country route from Bedford to Cambridge briefly runs parallel to the ex-GNR main line at Sandy. Here is 'Bulldog' heading north-west for Bedford in April 1935 with a short 'local' train, the first two vehicles of which are of LNWR origin. The ex-GNR metals are on the right with an Up coal train heading for Ferme Park.