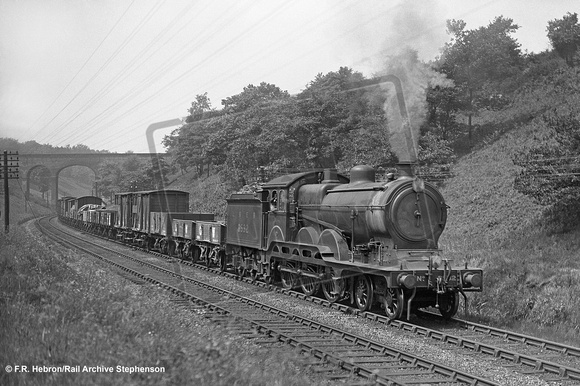 B12 4-6-0 No 8532 climbs Brentwood bank with a down goods train in 1927.
Peter Kerslake says "A post grouping photograph from 1927 of Great Eastern Railway S69, formerly 1532 and now running as L.N.E.R. 8532, reclassified as a B12 and one of the fifty one built at Stratford between 1910 and 1921.
This portrait depicts it with the former cabside number plates removed and with just the builder's plate on the trailing wheels splasher and running number on the tender. In 1928 the L.N.E.R. positioned the painted numbers on the cab sides above the trailing splasher with its ornate curved beading.
The decorative valancing over the driving wheels was removed in later years on many of the class, presumably as an aid to easier access to the main axle boxes whilst the additional ten built in 1928 had the curved footplating over the driving wheels with no valancing."
The two vans in the train are British built ROD 20T vans, sold to the Societe Belgo-Anglaise des Ferry Boats and in use on the Harwich - Zeebrugge train ferry service.
Photo: F.R. Hebron/Rail Archive Stephenson
F.R. Hebron/Rail Archive Stephenson
Powered by ZENFOLIO User Agreement
Cancel
Continue