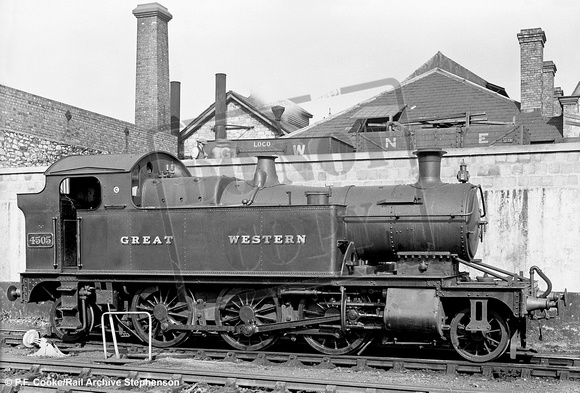 Peter Kerslake says "Little 4505 looks nicely cared for here at Newton Abbot depot back in 1925, this engine in later years seeing service further west down at St. Blazey depot in Cornwall, and she lasted in service until October of 1957.
4505 had been one of the first series of her class which was notable in being the last locomotives built not at Swindon, but at Wolverhampton Works between 1906 and 1908, thereby bringing to an end the longstanding G.W.R. policy of having tank engines constructed at Wolverhampton.
As had been the case with their forerunners, the "44XX" class, the 45XX's were essentially branch line engines, working from their early days in Devon, Cornwall and within South Wales.
In 1907 this engine, then numbered 2166 together with two of her sisters were transferred by the G.W.R. to the Rhondda and Swansea Bay Railway , thereafter in 1909 going to the Port Talbot Railway before being returned to the Great Western in or about 1912."