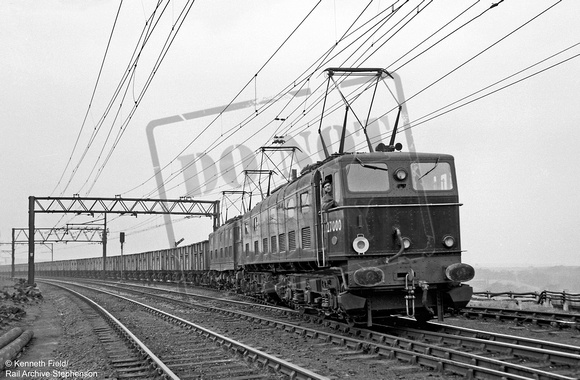 EM2 No 27000 and an EM1 leave Penistone sidings with a train of coal empties for Wath in 1954. (one has to assume the EM2 was on trial).
Peter Kersklake adds "Following their withdrawal from the Woodhead route in October of 1968 all seven of the class EM2 's were sold by B.R. to the Netherlands State Railways ,the original 27005 being retained by its new owners as a source of spares , with the remaining six working the Dutch netwwork , reviving memories of EM1 " Tommy " from 1947 .
Their purchase proved to be a sound investment , the locomotives serving their new owners well until 1986 .
Following the end of their days in service in Holland the original 27000 and 27001 were returned from Holland to Britain for preservation , whilst 27003 is preserved in Holland ."