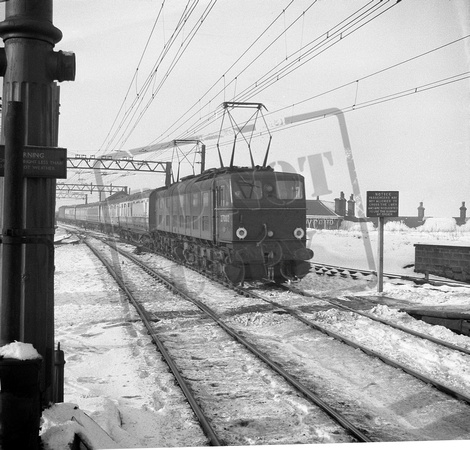 Peter Kerslake says "Snow as usual at Penistone, some 700 feet above sea level as one of the larger Electric locomotives in the shape of 27002 , the third of her class, runs in on an express passenger working.
Initial plans formulated in 1948 for the construction of twenty seven of the EM2 class had been based on the likely amount of traffic over the Woodhead line, especially the coal traffic , for so long the mainstay of freight workings on the Woodhead line.
This planned construction was, however, cut back to just seven as traffic was beginning to decline as coal fell out of favour for use in the factories , mills and power stations of Lancashire, the seven locomotives being built as a joint enterprise between Metropolitan Vickers and Bitish Railways, as had been the case with the earlier EM1's.
Following withdrawal in October of 1968 all seven EM2's were sold to the Netherlands Railways, following in the tracks of 26000 some twenty years earlier, with six reaching Holland whilst 27005 was kept here for spares, and upon their withdrawal from the Dutch network in 1986 two were returned to Britain, namely the original 27000 and 27001, both of which survived into preservation".
Powered by ZENFOLIO User Agreement
Cancel
Continue