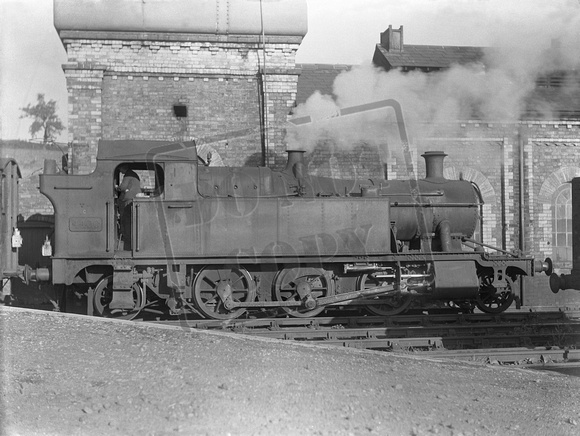 The very first GWR Prairie pictured in front of the shed at Much Wenlock. Allocated to Wellington it would be withdrawn within two years.

The first of her class, introduced in October of 1904 and initially allocated to Wolverhampton , but shown here in this splendid photograph in the sun at Much Wenlock , her long term " Stamping Ground " going back as long as December of 1935 when she was transferred to Wellington all the way from Laira .
In her earlier years 4400 had been in Wales before moving down into Cornwall and later Laira , and in common with all the class had worked the heavily graded Princetown branch across the wilds of Dartmoor whilst at Laira.
4400 ended her days at Wellington , being withdrawn in April of 1951.
The Wellington to Much Wenlock and Craven Arms branch line was a difficult one , with substantial gradients and it fell to sister engine 4403 to lead the way in 1934 to be the most suited class to work the line , resulting in a number of the class to follow in subsequent years .
This view shows clearly the extended and enlarged coal bunker with its recessed top for the lamp together with the strengthened and lengthened rear buffer beam necessary to accomodate same.
The small diameter coupled driving wheels show up well in this fine picture , and it was this feature which made the class so suitable for demanding branch line duties.

The first station at Much Wenlock was a terminus, and the 44xx is shown shunting in the old station, where the former platform is probably being used as a loading bank. The later station was further north and the through line by-passed the old station completely, passing the other side of the loco shed. The first station closed in 1884.
© Rail-Online
Powered by ZENFOLIO User Agreement
Cancel
Continue