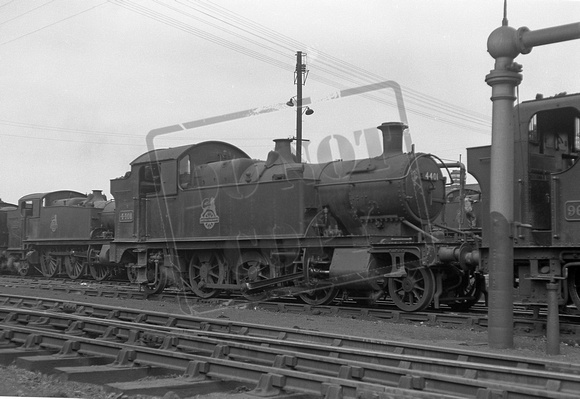 4401 , the second of the class , seen here on 30th . June , 1953 , had been at Newton Abbot from December of 1952 but like all her sister engines , had in earlier years served the cross Dartmoor Princetown line , in fact starting her life in July of 1905 on that line when she was initially allocated to Laira shed.
Whilst at Newton Abbot 4401 would have worked principally on the Moretonhampstead branch , mainly on freight turns.
I recall seeing 4401 at Laira in 1953 or thereabouts whilst it was a Newton Abbot engine when it replaced our 4410 on the Princetown branch for a short while whilst the Princetown resident 4410 was undergoing repairs.
Note the strengthened rear buffer beam , extended to hold the enlarged coal bunker with its increased coal capacity a feature which all the class except 4410 were to receive.
Powered by ZENFOLIO User Agreement
Cancel
Continue