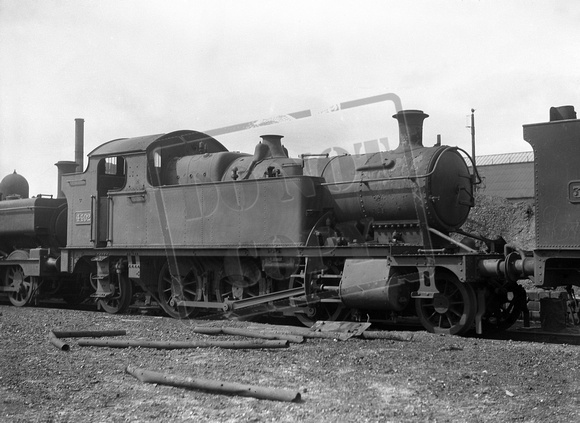 Stated here to be at Swindon Works in April of 1950 , the third of the little 44XX class had been withdrawn from Laira shed in the previous December from where it had worked the Yelverton to Princetown branch across the wilds of Dartmoor for four years from September of 1945. 4402 must, therefore, be awaiting disposal at Swindon.
4402 had first worked the Princetown line in March 1909 until October of 1912, thereafter making a number of return visits and reallocations to Laira during its lifetime.
Each and every of the eleven members at some time or another worked the Princetown line during the fifty years in service of the class.
This date would be right for 4402 at Swindon , as further research now discloses that the little stalwart of the Princetown branch was withdrawn on the 14th. December of 1949 , remaining here at Swindon and awaiting disposal until mid August of 1950 , the first of her class to be withdrawn.
4402 disgraced herself on 25th . January , 1939 , apparently , as according to reports her driver set off rather too prematurely from Yelverton that day with the afternoon working up to Princetown and ran through adverse points just outside Yelverton station into a buffer stop , down an embankment and ending up below the track .
Rescue came about on the 3rd. February , doubtless with the necessary breakdown crane having to be brought up from Laira , and 4402 was run down to Laira , her place almost certainly being taken by sister engine 4410, Laira's other member of the class which was often used as " standby " engine for the Princetown line when 4402 was stopped for boiler washouts and the like at Laira.
Following this event a spell at Swindon gave 4402 an extended life on the branch , so she survived her mishap that day !
Powered by ZENFOLIO User Agreement
Cancel
Continue