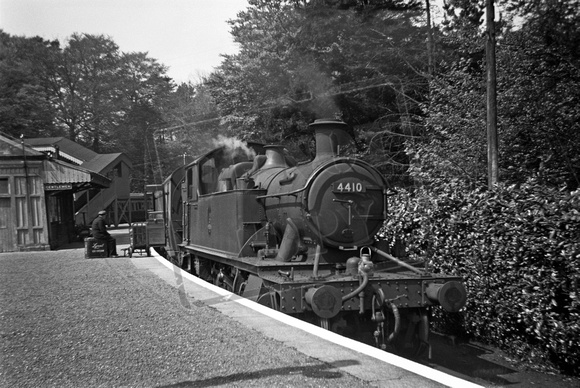 One of my favourite photos of all time. The 44xx basks in the summer sun while the driver takes a break. 4403 was the regular and last locomotive to work the Princeton line.

Peter Kerslake adds I took this one at Yelverton , the junction of the Princetown branch high up on Dartmoor where the branch connects with the line up from Plymouth to Tavistock and Launceston and just visible in the background. 4410's driver is sitting on a Lyons Ice Cream cool box...treats for the prisoners at Princetown prison perhaps? Known for its miles of sharp curves the ascending line to Princetown across the wilds of Dartmoor was not really workable by anything bigger than 44XX class locomotives which had special flange lubrication wquipment added, but in its final years and as that class diminished 45XX engines, despite their larger wheels, were used. There was a small engine shed at Princetown, with coaling and watering facilities, but the branch engines would come down to Laira from time to time for any more heavy attention.

All eleven of the 44XX class spent some time during their lives on the Princetown branch , their small diameter coupled driving wheels being well suited to the severe curves for which the line across Dartmoor was renowned.
4410 was the last of her class to work the Princetown branch , being transferred to Laira from Exeter in March of 1953 and replacing sister engine 4407 on the line , that engine having just been condemned.
4410 was herself withdrawn in September of 1955 thereby ending the association of this class with the Princetown line going back fifty years to 1905 when 4401 first appeared, and for the final year it fell to the larger 45XX class to work the line.
4410 herself first worked the Princetown line in November 1906 , but that was just a bit before even my time and my picture must , therefore , date from shortly after March , 1953 .
Powered by ZENFOLIO User Agreement
Cancel
Continue