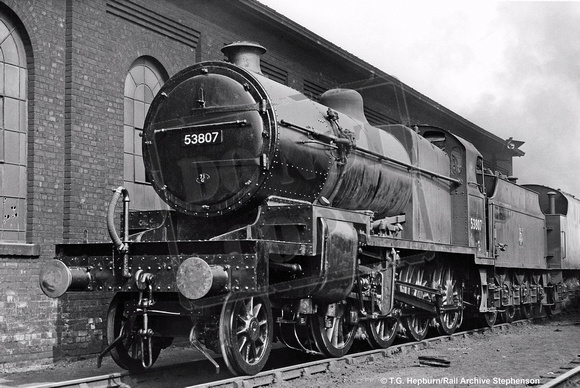 S&DJtR class 7F 2-8-0 No 53807 ex-works at Derby shed on May 18, 1952.
Peter Kerslake says "Destined to be the last of the class to remain in service working on the Somerset and Dorset line and allocated to Bath Green Park until September 1964, the 2-8-0s were the mainstay of both passenger and freight workings. They were purpose built for the demands of the Somerset and Dorset with its heavy coal and mineral traffic in addition to the frequent heavily loaded passenger workings in the Summer months. Introduced in 1914 with six entering service from Derby Works followed up with an additional five in 1925 from the Works of Robert Stephensons, these five having larger boilers than the initial six.
When heavy overhauls were due the class were despatched from Bath to Derby Works and 53807 has certainly been through the Works but with just the front end repainted it is unlikely that the boiler has been removed and it has had what Swindon would call a "Sole and Heel" overhaul."
Photo: T.G. Hepburn/Rail Archive Stephenson
T.G. Hepburn/Rail Archive Stephenson
Powered by ZENFOLIO User Agreement
Cancel
Continue