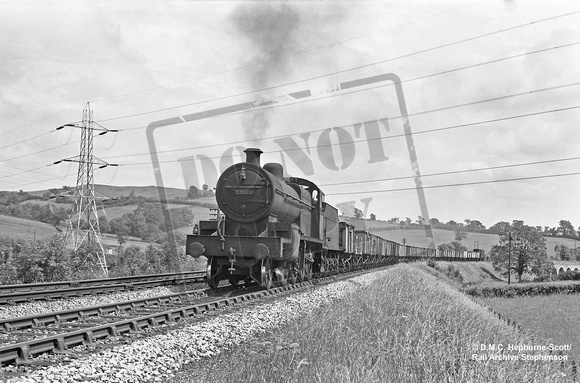 Peter kerslake says "A substantial rake of what loooks like 30 coal wagons are in the hands of class "7F" 53803 seen here at Evercreech, one of the busiest locations of the Somerset and Dorset line with the junction for the Highbridge line situated at the northern end of the busy station, this working probably being empties for Norton Hill Colliery.
Introduced in 1914 by the Midland Railway and designed by their Sir Henry Fowler specifically for duties handling the heavy coal and mineral traffic on the line the eleven locomotives comprised of two batches, the initial six being built at Derby whilst the second five equipped with larger boilers came from Robert Stephensons in 1925, the class undertaking duties over the Somerset and Dorset until September of 1964 when 53807 was destined to be the last remaining in service, the first casualty having been 53800 which was condemned in 1959.
Although classified as "7F's" these workhorses undertook many passenger workings, especially on busy Summer Saturdays with heavy overhauls taking them out of service and to Derby Works."