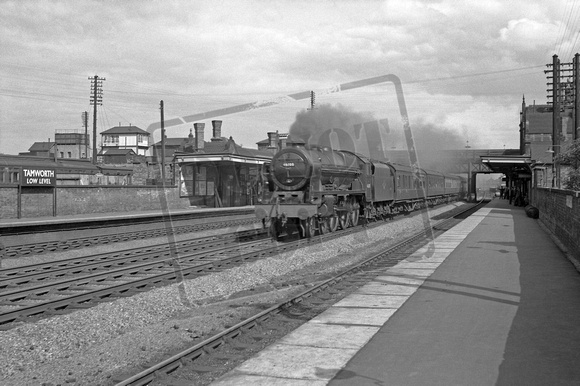 A fine study of 46100 " Royal Scot " storming through Tamworth's low level station with the signal box on the high level line from Birmingham through to Derby and beyond visible on the left.
Rebuilt from her original condition in 1950 " Royal Scot " looks in fine condition in this view and was withdrawn in 1962 but was saved from being broken up by being one of four Midland Region locomotives purchased by the late Sir Billy Butlin for static display at his holiday camps , 46100 ending up at the Skegness camp.
As interest in the locomotives at the camps diminished " Royal Scot " went on loan to the Bressingham Steam Museum at Diss in Norfolk where it was restored to running condition on a short length of track within that facility .
Tales tell that the four engines concerned had been so well mechanically prepared for their sale to Butlins in 1962 that in 1970 they were found to be in a much better condition than had been expected , a testimony to the workforce at Crewe responsible for their preparation, despite eight years standing in the open and exposed to sea air !
The subsequent purchase of 46100 by Bressingham from Butlins has ensured the engine's future , and a restoration in 2009 happily now enables " Royal Scot " to work the main line once again
© Rail-Online
Powered by ZENFOLIO User Agreement
Cancel
Continue