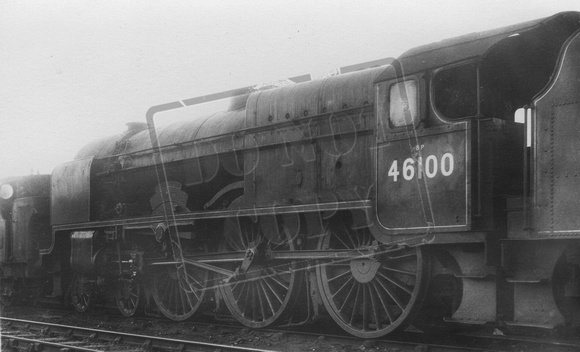 In well worn 1946 livery - just a few months from rebuilding
Colin Ryder has done some detective work -
This photo shows 46100 in the 1946 LMS black livery with maroon bands edged in white. The numerals are of the short-lived 1948 BLOCK style applied by BR LMR until late 1948 when the transfers of the Gill Sans numerals became available from August onwards.
The caption "In well-worn 1946 livery - just a few months from rebuilding" is a little vague; I hope to show that there was an intermediate stage in the cabside livery prior to rebuilding.

The loco was rebuilt with taper boiler during April to June 1950. However, there are other photographs taken prior to April 1950 of the loco still in 1946 LMS black livery but with the cabside numerals in 8" Gill Sans style! The earliest I have found is on David Hey's Collection 2 website, link "BR LMR-1" (scroll down to 1/4 stage), a photo attributed to J Habart and captioned "at Crewe (station) in May 1949"!
When might this intermediate repainting of the cabside have been carried out? Chris Hawkins, op.cit.lists three visits to works: a Light Ordinary(LO) repair 10 November - 11 December 1948, a Light Intermediate(LI) one 1 - 26 April 1949 and a Non-Classified(NC) one 13 - 21 May 1949. Your photo presumably shows the loco waiting at Crewe (Works?) prior to one of these visits. Without some more dated photos taken between these visits to works or a set of locoman's notes emerging, speculation is all that remains.
Powered by ZENFOLIO User Agreement
Cancel
Continue