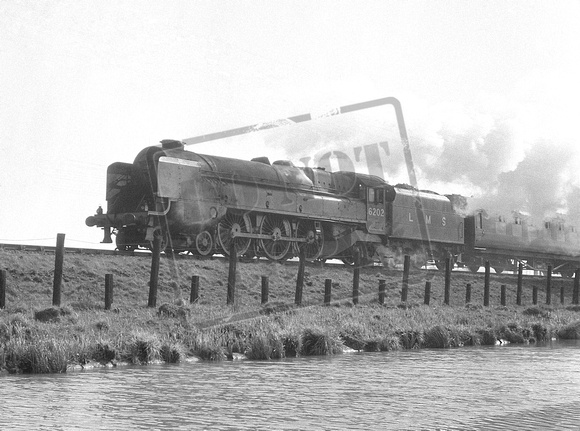 The LMS&R ‘Turbomotive’ No.6202 in 1948 on a northbound train at Brinklow. It is in LMS 1946 lined black livery which was applied during a Heavy General repair completed in April 1947. No.6202 was out of traffic with transmission failure from April 1948 until March 1949, after which it was returned to service as 46202.

Mr. Stanier 's decision made in 1936 to build the third of his " Princess Royal " class as an experimental turbine driven locomotive resulted in an engine which was smooth in operation , without the customary " Hammer Blow " effect customary to the more conventional design , together with the ability to start away from a standstill without the risk of slipping , unlke his first three of his " Princess Royal " design which from early days in service had shown themselves prone to slipping badly on starting.
The turbine machinery and gearing in the " Turbomotive " , as she became known , was built by Metropolitan Vickers and contained in an oil bath providing essential and permanent lubrication and 6202 was used extensively in her early years on the daily early morning express passenger service from Euston to Liverpool , returning back home on the 5.25.p.m. service from Liverpool that same afternoon.
There were lengthy spells spent in store at Crewe over the years , however , and after having run almost half a million miles the decision was taken in 1952 to rebuild 6202 a a conventional four cylinder express locmotive , rather than to undertake extensive repairs to her main turbine unit .
Sadly , after being named " Princess Anne " following her being rebuilt , and now numbered 46202 , the engine was badly damaged in the October 1952 accident at Harrow and Wealdstone , and could not be rebuilt.
© Rail-Online
Powered by ZENFOLIO User Agreement
Cancel
Continue