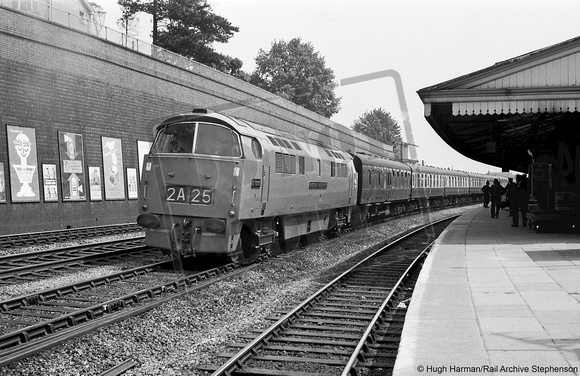 D1000 Western Enterprise passes High Wycombe with the 1.10pm Paddington to Birkenhead Woodside on July 9, 1962. Note the 2A25 headcode - the photographer was a booking clerk at High Wycombe so I don't expect him to have made a mistake with the train details.

Peter Kerslake says "A splendid portrait of the pioneer "Western" D1000, "Western Enterprise" speeding through High Wycombe with that impressive wall and its neatly set out advertisement panels providing a fine background , the date being 19th. July, 1962.
Allocated to Plymouth's Laira depot from being built at Swindon in late December of 1961 "Western Enterprise" was followed at Laira two months later by D1001 "Western Pathfinder" with Laira eventually housing fifteen members of the class, but as would be expected Old Oak Common had the main share of the "Westerns" with twenty six eventually on is books, sufficient to cover the rosters to South Wales, the Westcountry and the Wolverhampton line and beyond.
Not without their problems the "Westerns" excelled, however, on the services between Paddington and the West of England in particular and were capable of tackling the South Devon banks between Newton Abbot and Plymouth without the need of a pilot engine, a marked improvement on the earlier "Warships" which were invariably being worked double headed on those services."
Photo: H.K. Harman/Rail Archive Stephenson
H.K. Harman?Rail Archive Stephenson
Powered by ZENFOLIO User Agreement
Cancel
Continue