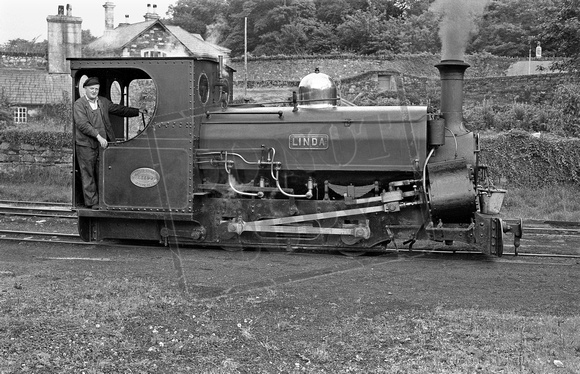 Penrhyn Quarry Railway 0-4-0 Hunslet Saddletank 'Linda'. Built by Hunslet of Leeds in 1893 (WN 590) sold to the Ffestiniog Railway in 1963 and rebuilt by them as a 2-4-0 Saddletank tender locomotive. Preserved as such and operational.

The 1 ft. 10 3/4 in. gauge (578 mm) Penrhyn Quarry Railway in in Caernarfonshire served the Penrhyn slate quarry near Bethesda taking the slate to Port Penrhyn at Bangor. The line closed in June 1962, but in happier times 'Linda' is seen at Port Penrhyn in April 1954.