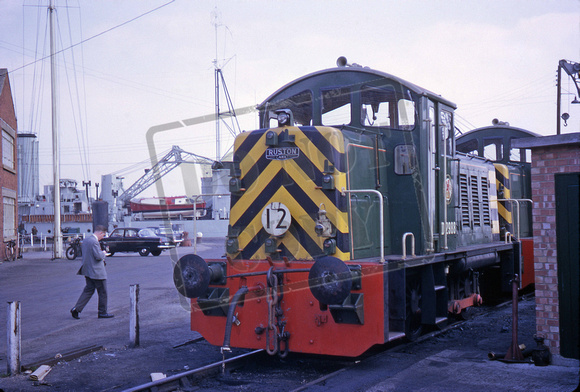 Brand new at the end of June. This is the one that was withdrawn in 1973 to become a mobile piece of plant at Eastleigh works and later preserved.

Tim Peacock reports "This picture of D2988 at Southampton docks is of interest to me for the ship in the background. From the funnel configuration and position of crane (to recover a Walrus plane), it is likely to be a Fiji (or Crown Colony) class cruiser of 1939/41. At the date of the photo only 3 (of 11) were left. Only 2 were lost during the war. They were;
HMS Kenya - unlikely as scrapped at Faslane a month later.
HMS Mauritius,
HMS Bermuda,
I would plump for Bermuda as she was reported in service as flagship reserve forces in 1962 and might explain her presence at Southampton".
Powered by ZENFOLIO User Agreement
Cancel
Continue