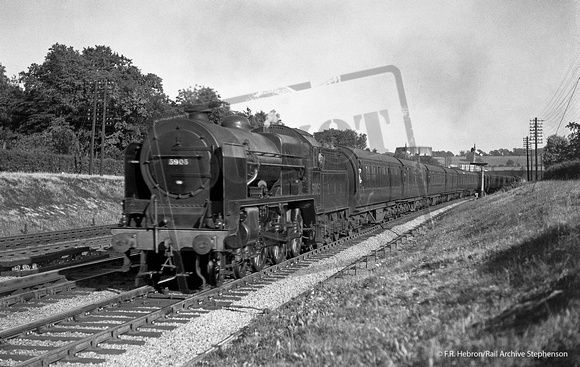 LMS 5XP 4-6-0 No.5905 Lord Rathmore passes Elstree & Borehamwood with a St. Pancras to Leeds express in 1934. Writing in The Railway Magazine at the end of 1934, C.J Allen said the “Baby Scots” “have made almost every Midland booking look simplicity itself….. [and are] very free running on the level and downhill; for high speed on favourable grades it would be difficult to find a superior to these noteworthy engines”. One of the runs from London to Leicester with No.5905 with a ten-coach train had a sluggish start between Kentish Town and Hendon, although it recovered slightly to Luton. From there began a transformation as Bedford was passed within 10 sec. “of the almost impossible 18 minutes allowance from Luton”. This involved covering the 14 miles between mile-posts 37 and 51 in 9 min. 40 sec., at an average of 86.9 mph, with a maximum speed of 91.3 mph.
Photo: F.R. Hebron/Rail Archive Stephenson
F.R. Hebron/Rail Archive Stephenson
Powered by ZENFOLIO User Agreement
Cancel
Continue