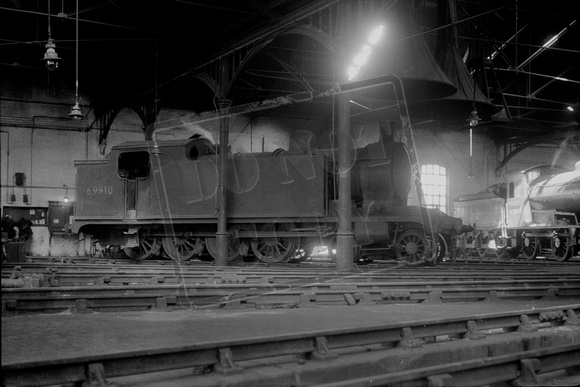 Selby shed on a Saturday lunchtime. The engine had finished its work shunting at Gascoigne Wood sidings -the large marshilling yard about 6 miles from Selby on the Micklefield line. Still in light steam; the crew are signing off. 65888 on right.

This was the day of the SLS 'Golden Jubilee' rail tour featuring 60007 when 112 mph was achieved, the highest authenticated post-war speed with steam in the UK. David was unaware of the tour and had taken a trip from Teeside to Doncaster stopping off at Selby to visit the shed and record this veteran. It had replaced an even older shunting engine on the Gascoigne Wood shunt job, one of the Q1 0-8-0 tanks converted from GCR Q4 locos during WW2 and was regarded by the staff as vastly superior.