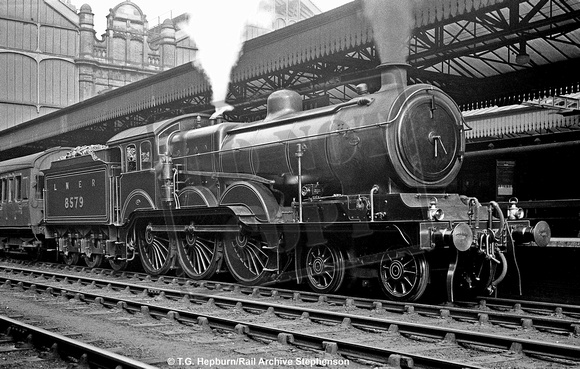 B12/2 4-6-0 No 8579 at Nottingham Victoria when new from Beyer, Pecock & Co., in autumn 1928 with a Manchester London Road to Marylebone express.
Peter Kerslake says "Class "B12/2" 8579 was delivered to the L.N.E.R. by Beyer Peacock & Co. after the L.N.E.R. had decided to use the cab sides for the running numbers, but has the number on the tender sides. It still has the beading over the trailing driving wheel splashers but the ornate valancing over the driving wheels, so distinctive on the earlier locomotives, has given way to the plain framing, presumably in order to ease access to the bearings for lubrication."
Photo: T.G. Hepburn/Rail Archive Stephenson
T.G. Hepburn/Rail Archive Stephenson
Powered by ZENFOLIO User Agreement
Cancel
Continue