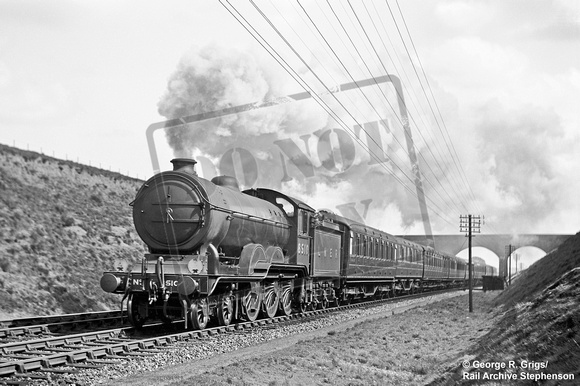 B12/3 4-6-0 No 8510 climbs Belstead bank out of Ipswich with a Norwich to Liverpool Street expres in 1937.
Peter Kerslake says "One of the original Great Eastern class S69 4-6-0s, renumbered 8510 and classified as a B12 by the L.N.E.R.
Rebuilt by Edward Thompson from 1930 until 1944 with modified valve gear and larger boilers and now classed as B12/3s the class were thereafter known for their free running capabilities and reduced coal consumption. There were still 42 left in service in the mid 'fifties spread over six depots with Stratford having the most with fifteen, closely followed by Ipswich with thirteen and the remainder at Yarmouth Beach, Norwich, Peterborough Spital and Grantham. L.N.E.R. 8534 was the first and very early casualty in 1945 whilst 61572 outlived all the others and made it into preservation in 1961."
Photo: George R. Grigs/Rail Archive Stephenson
George R. Grigs/Rail Archive Stephenson
Powered by ZENFOLIO User Agreement
Cancel
Continue