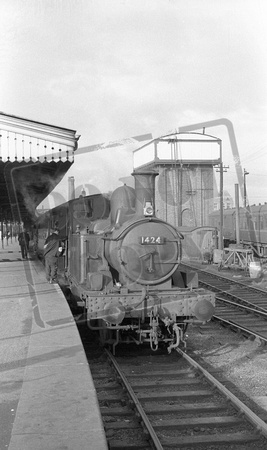 Mainstay of the services between Gloucester Central and Stroud via the " Golden Valley " , Horton Road's allocation of " 1400 " class tanks also worked the Sharpness line until both services came to an end on the 31st .October , 1964 whereupon the remaining members of the class at Gloucester were withdrawn , a number going into store at the adjoining former Midland shed at Barnwood , used by that date just for holding condemned locomotives awaiting their fate at the various breakers' yards in South Wales .
1424 didn't make it to the end of those sevices and must have been an earlier withdrawal than her surviving sisters.
© Rail-Online
Powered by ZENFOLIO User Agreement
Cancel
Continue