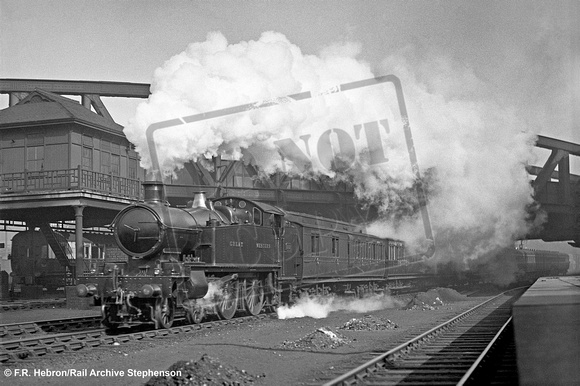 Peter Kerslake says "A splendid portrait of "County Tank" 2239 working a duty for which it had been designed by Mr. Collett, namely a passenger duty from Paddington, the class being intended for such duties and destined for such locations as Oxford, Reading, High Wycombe, Aylesbury and Hungerford.
Totalling thirty in number the first twenty of the "County Tanks" had the squared drop ends to the front frames as shown here, whilst the final ten had the curved design coupled with susperheated boilers, extended smokeboxes and larger chimneys .
Their early demise began with 2228 being condemned in 1931 with the larger and faster "6100" class replacing them, one of the less favoured apects of the "2200's" being their four coupled driving wheel design which made them less versatile than their six coupled replacements.
The last to survive was 2246 which ran until 1935."