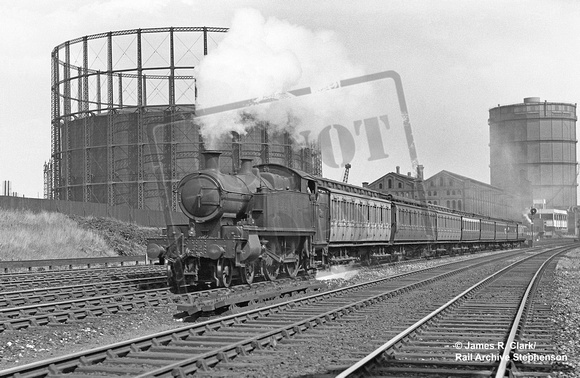 Peter Kerslake says "With a load of eight Clerestory coaches in her charge "County Tank" 2224 heads away from Paddington on a suburban semi fast, a duty for which her class had been primarily intended when introduced by Mr. Collett in 1905.
Totalling thirty in number and a tank engine version of the earlier "County" class of 4-4-0 tender engines the "County Tanks" spent their time at Old Oak Common and Reading sheds rostered to both fast and semi fast services between Paddington and Reading, Aylesbury, Hungerford, Oxford and High Wycombe in particular.
2224 shown here has the squared drop ends to her front frames with exposed valve head covers a feature changed on the final ten of the class built in 1912 with the rounded design of front frames.
2228 was the first to be condemned in 1931 with 2246 surviving until 1935, he class being replaced by the faster and larger "6100" design."