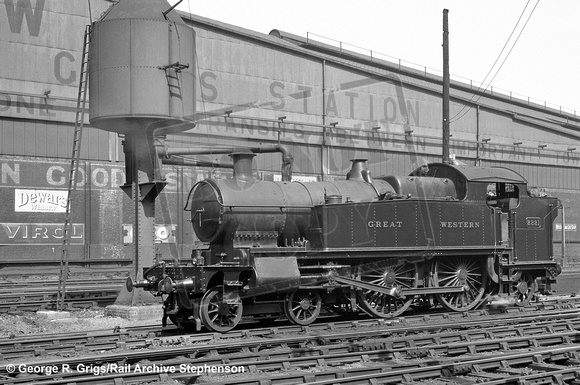 Peter Kerslake says "Widely known as "County Tanks" by virtue of their being a Tank Engine version of the former "County" class of tender engines Mr . Churchward's "2221" design was primarily intended for use on suburban duties, with the first of her class, 2221 seen here entering service in late 1905 and remaining until being condemned in September of 1933
Totalling thirty in number the "County Tanks" were destined to serve mainly in and around Paddington as seen here, working both fast and secondary passenger rosters from the Capital to such locations as Reading, High Wycombe, Oxford, Hungerford and Aylesbury, with the class being allocated at the Motive Power Depots at Old Oak Common and at Reading.
Their relatively short life was due in part to the faster "6100" class entering the scene in 1931 and the first of the "2221" withdrawals came about in 1931 when 2228 was condemned, the last in service being 2246 which lasted until 1935."