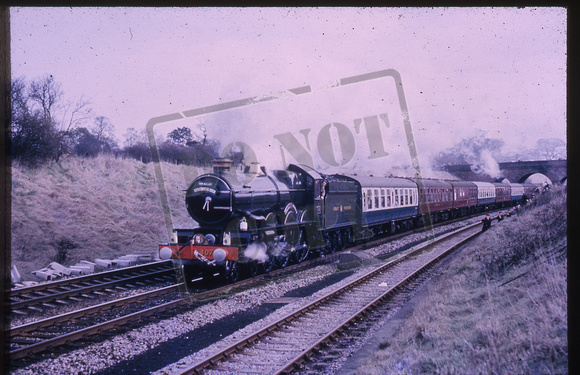 4 March 1967. Restored Collett Castle class 4-6-0 4079 Pendennis Castle working Ian Allen’s “Birkenhead Flyer” between Didcot & Chester.
This was one of the two Specials run this day from Paddington to Chester and return, the other Special being headed by 7029 , "Clun Castle", both run to mark the end of through services from the Capital to Birkenhead.
Running behind 7029, "Pendennis Castle" had in fact, left Paddington ahead of "Clun Castle", but arrived at Shrewsbury at about 1.p.m., some 20 minutes or so behind 7029 which had taken the shorter outward route via the Bicester Cut Off.
The crowds of enthusiasts at Shrewsbury that day were immense as this was also the final day of the "Cambrian Coast Express" as well.
Powered by ZENFOLIO User Agreement
Cancel
Continue