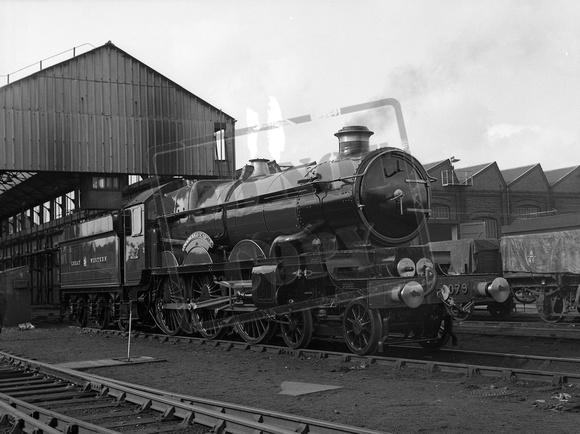 What an absolutely superb shot of 4079 , " Pendennis Castle " outside the weighing shop at Swindon Works , now privately purchased for preservation and restored to her former splendour here at the Works.
4079 looks very much as she would have done in Great Western days , apart from the modified outside steam pipes .
One of the " Castles " used by the Great Western on its top link workings , including the Cheltenham Spa Express in days past , 4079 took part in the 1925 locomotive exchanges , running on LNER expresses between Kings Cross and Doncaster , Leeds and Bradford , and later , in British Railways service , was allocated to a variety of Motiive Power Depots spending many years at Gloucester .
Periods at Cardiff , Stafford Road and Bristol Bath Road preceded the locomotive being stored out of service from early in 1962 until late 1963 , following which it was returned to service and worked from Bristol Bath Road again.
The unfortunate failure on the Special at Westbury on 9th. May , 1964 could have been the end for 4079 but happily she was privately purchased before leaving for Australia but later returning to this Country via Avonmouth on 8th. July , 2000 .
Since that time 4079 has been undergiong restoration by the Great Western Society at Didcot and we shall be able to see her back on the main line in the not too distant future
Powered by ZENFOLIO User Agreement
Cancel
Continue