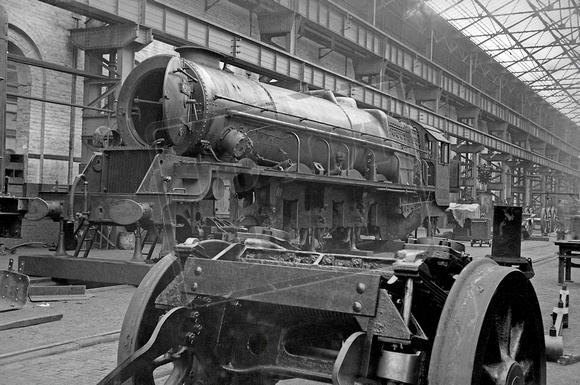 LMS Stanier steam turbine 'Turbomotive 7P' class 4-6-2 No. 6202. Built at Crewe in June 1935, rebuilt as a conventional reciprocating locomotive in Aug. 1952 and named 'Princess Anne'. Withdrawn after being damaged beyond repair in the Harrow & Wealdstone disaster in May 1954 as BR No. 46202. A very interesting view of the famous 'Turbomotive' undergoing a major overhaul at Crewe Works in February 1937. Although 6202 was one of the most successful British experimental designs, nonetheless as with countless other 'one-offs' the cost of maintenance, spares and specialised engineering was not ultimately in her favour for proliferating the design. I believe that only the 'Deltics' achieved the distinction of total acceptance after an experimental prototype was introduced.