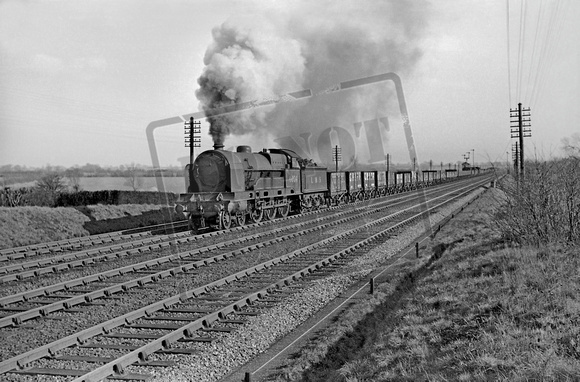 Ex London & North Western Railway Bowen Cooke 'Rebuilt Claughton' class 4-6-0 No. 6005. Built at Crewe in Aug. 1920 as L&NWR No. 42 and named 'Princess Louise', rebuilt with large boiler in Apr. 1928, name removed in July 1935 and withdrawn in Apr. 1949 still in crimson red passenger livery as LMS No. 6004.
The L&NWR 'Claughtons introduced in 1913 were a somewhat disappointing design that the LMS decided could be improved by fitting a larger boiler. It looked the part but made little difference to the nineteen so fitted. Most of the class were withdrawn prior to WW2. Remarkably 6004 seen here in April 1937 at Ashton in Northants, was to survive (just!) to become a BR locomotive some eight years after the remainder of her classmates had gone for scrap.