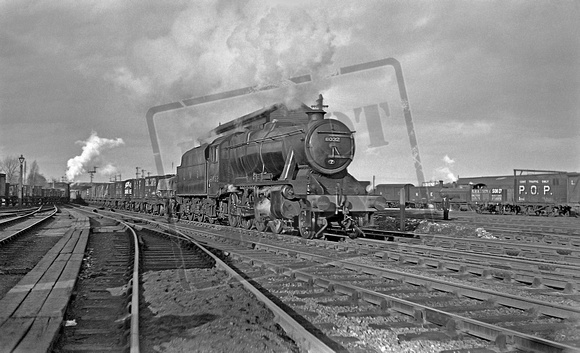 LMS Stanier '8F' class 2-8-0 No. 8032. Built by Vulcan Foundry in 1936 as LMS No. 8032 it was requisitioned by the War Department in 1941 and numbered WD 585. This '8F' and many others were shipped abroad to run in Persia (Iran). After WW2 it was bought by Italian State Railways becoming their class 'FS7' and was withdrawn in 1956, never returning to the UK. It is seen here running into Northampton Castle Station with an up freight in November 1936. In the yard is a POP (Peake, Oliver & Peake Ltd.) coke wagon - a large coal agent from London, and an A Hanson & Sons Ltd
coal wagon belonging to a much smaller merchant which is new to me, he may be based at Blisworth.