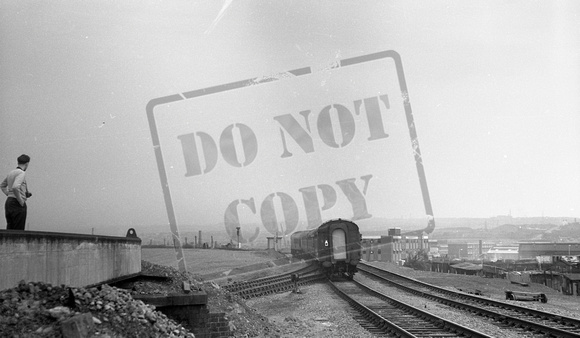 .
2E57 Leeds Central - Doncaster crossing Gelderd Road Junction, heading for Wakefield
While researching the images of Gelderd Road Junction, Leeds, Vic Smith wondered why the trains were not using the junction chord line onto the former LNWR line over Holbeck Viaduct.
On a couple of the images, 1703-264, 1703-263, the chord line is not visible, suggesting they were taken during construction.
The junction opened on 1 May 1967, when all trains used City Station after the closure of Central Station on 29 April 1967.There was no service into Central on Sundays.
This means all the 1967-05-06 dates for Leeds Central area photos are incorrect as Leeds Central closed 1967-04-29..
Supported by fact D9014 was in Doncaster Works from May 1- June 12.

This leads me to believe that the photos of Gelderd Road Junction, Leeds were taken before the Junction officially opened on 1967-05-01, hence all the trains using the old route.

1703-215 & 1703-221 shows a crowd of photographers – could this be the last day of operation?.
© Rail-Online
Powered by ZENFOLIO User Agreement
Cancel
Continue