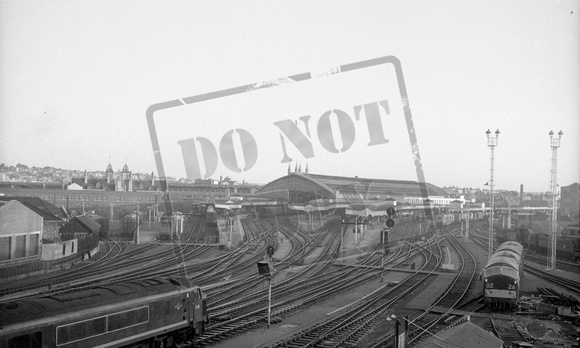 An interesting panoramic view of the southern end of Temple Meads , undoubtably taken from the Bath Road overbridge with what had been 82A ., Bristol Bath Road steam shed on the extreme right , now housing a couple of Diesels with a line of former steam locomotive tenders apparent , probably in use for waste disposal as the site is redeveloped following its closure as a steam shed.
The ornate building on the left , with its twin towers , is the former Bristol and Exeter Railway's original station building , this company together with the Great Western Railway and the Midland Railway being one of those three companies originally responsible for the initial building of the station in 1876.
The top of the existing and impressive stone facade , which fortunately exists today , is visible above the main station roof , but the tower which had risen above it was destroyed by enemy action in January of 1941 and was not replaced.
© Rail-Online
Powered by ZENFOLIO User Agreement
Cancel
Continue