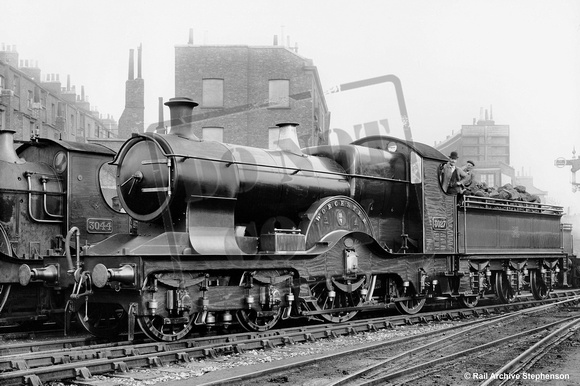 Peter Kerslake says "3027 was the seventh of the initial batch of eight Dean "Singles"built at Swindon in 1891 with no less that eighty in service by 1895.
Bowler hats seemed to have been the standard headwear for G.W.R. drivers of the day but I wonder how they kept them on when one of these engines was running at speed.
The approach to Paddington station was in an area notorious at that time for poor quality and grossly overcrowded, squalid housing dating from the 1850s. The ends of the terraced dwellings of Alfred Road, Waverley Road and Hamden Street are all visible in the background although the appropriately named "Great Western" public house and drinking tavern in Hamden Steet is hidden from view.
The depot here was demolished in 1906 when Old Oak Common replaced it."