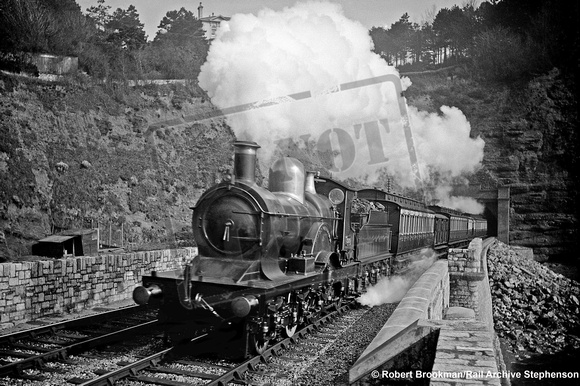 Peter Kerslake says "That fine house on the hill, just visible in this view, is still there today with its commanding view westwards out to sea and down to Teignmouth. Apart from today's massive enlargement of the rock sea defences to the seaward side of the line the scene is today virtually unaltered.
There had been a manned "Pillbox" lookout built into the rock face on the extreme right adjacent to the tunnel mouth, built during the last war with its purpose being to give early warning of any sea attack directed to this vital stretch of line by German "E" boats and it remained there for many years afterwards, but I think it's gone now.
3030, shedded at Bristol, is heading a local "All Stations" to Newton Abbot. There is a milk van behind the leading clerestory non-corridor coach, loaded with empty churns destined for Totnes and Cornwall for use on the next day's train to London in the days long before milk tank wagons came into being!"