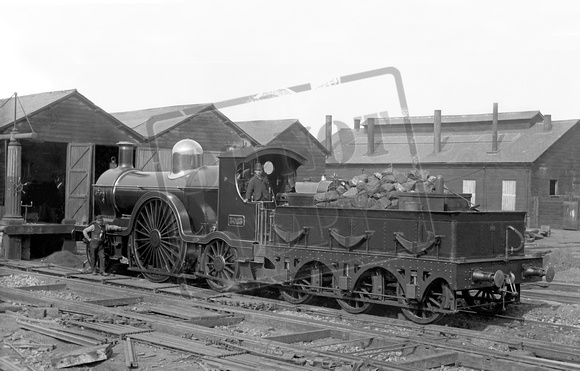 A glass half plate negative taken by Walter Walden of the Islington Photographic Studio at Westbourne Park, London in 1891.

No 3023 was one of 30 Dean singles built in 1891/2 (3001 Class), with 7’9” driving wheels and 20” x 24” cylinders. Despite the fact that the broad gauge was in its very final months, new broad gauge engines were still needed to maintain services and eight of these engines (Nos 3021-3028) were built as convertibles with wheels outside the frames to run on the broad gauge. They were converted to standard gauge in summer 1892. After a derailment in 1893 it was decided to give them front bogies, thus transforming them to the 3031 Class of 4-2-2. At the time that this photograph was taken, No 3023 was in steam with wisps appearing at the safety valves and beneath the footplate.