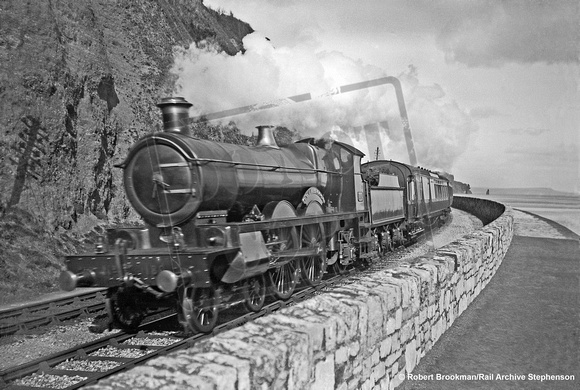 Two-cylinder 4-4-2 No 180 Coeur de Lyon approaches Teignmouth with a down express, possibly the Cornish Riviera, in 1908.
Peter Kerslake says "A classic image from the sea wall at Teignmouth as "Scott" class 4-4-2 number 180 runs westwards towards Newton Abbot. Built at Swindon in 1905 and one of the batch of nineteen constructed that year 180 was unnamed during its early time in service, receiving Coeur de Lion nameplates in March 1907. Members of the "Scott" class were rebuilt by Swindon from April 1912 to January 1913, each locomotive taking some three to six months to convert into a 4-6-0 wheel arrangement, joining the ranks of the newly constucted "Saints". 180 was converted during January 1913, being one of the last such conversions, and having been renumbered 2980 in late December 1912 whilst in the Works. In their early days the "Scotts" would have been concentrated at Paddington depot, as it then was, from where they worked the West of England passenger. Coeur de Lion was withdrawn in its "Saint" form in May 1948."
Photo: Robert Brookman/Rail Archive Stephenson
Robert Brookman/Rail Archive Stephenson
Powered by ZENFOLIO User Agreement
Cancel
Continue