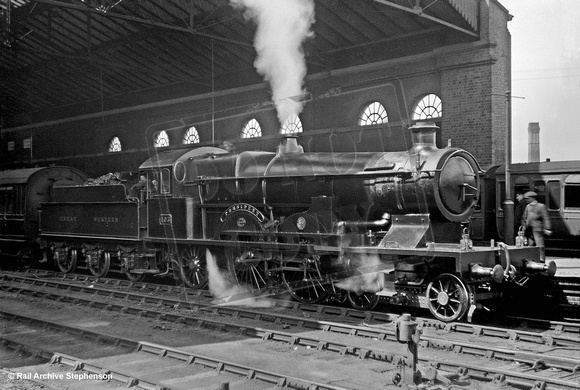 French compound 4-4-2 No 103 President stands at Wolverhampton in c1923 after being fitted with a Swindon boiler.

Peter Kerslake says "A stirring image of the second of the three French built Compounds purchased by the Great Western Railway, namely 103 "President" seen here at Wolverhampton in 1923 and splendidly turned out by her home shed's cleaners.
Given her name by the Great Western in 1907 this engine and her sister 104 "Alliance" had come to Swindon in June of 1905 and had followed 102 "La France", a slightly smaller design which had arrived at Swindon in late 1903,
All three Compounds were rostered from Old Oak Common in their early years on the West of England passenger workings from Paddington but from 1907 onwards they were to be found at Wolverhampton Motive Power Depot and then in 1913 onwards they were shedded at Oxford, working from there to Paddington and Birmingham.
103 was withdrawn in March 1927."