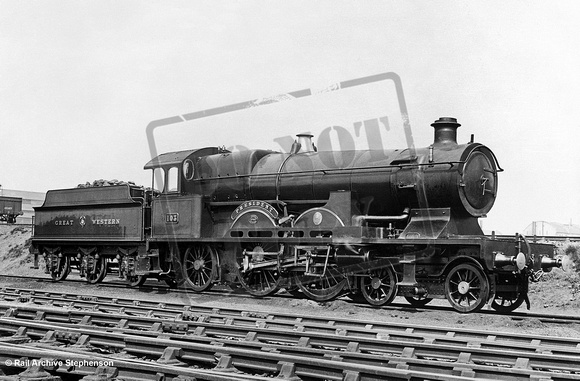 French compound 4-4-2 No 103 President after being fitted with a Swindon boiler.

Peter Kerslake says "A fine portrait, possibly taken at Swindon, of French Compound 103 seen bearing her "President" nameplates fitted in 1907, the engine having earlier run nameless for two years following its purchase in company with 104 "Alliance" by the G.W.R. in June of 1905.
These two locomotives were similar to 102 "La France", taken into stock at Swindon two years earlier, the first of the three French Compounds acquired by Mr. Churchward on behalf of the Great Western at a time when he was seeking to design an express passenger locomotive.
The Compounds provided much useful information for those at Swindon during their time in service, with Mr. Churchwards "Star" class incorporating a number of details from the French Compounds which had worked the heavy passenger services between Paddington and the West of England in their early years, later seeing service from Wolverhampton Stafford Road and then from 1913 from Oxford Motive Power Depot"
Photo: Rail Archive Stephenson
Rail Archive Stephenson
Powered by ZENFOLIO User Agreement
Cancel
Continue